THE BEST SOLUTION FOR AUTO AND AVIO INDUSTRY

In our offer we have all types of cut wire abrasives, from different wire, ranging from different diameter made to satisfy the needs of all our customers.

Our cut wire abrasives have the possibility of re-use with the service life of cca. min 4000 cycles no matter grain size and hardness.

Cut wire abrasives have a high level of consistency in terms of shape and hardness which directly influences the increase of quality of the surface treatment of the materials being treated.

Taking into account large number of possible reuses, cut wire abrasives last longer, thus saving on ordering and purchasing another quantity of some other abrasives is obvious.

The fact that the particles of our cut wire abrasives do not break, result in the longer lasting of the operational mix used for treatment. 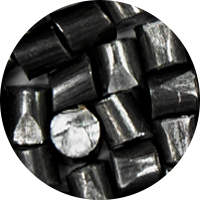 still has the sharp corners from the cutting operation. As-cut wire shot is an effective cleaning abrasive but it isn't suitable for shot peening applications since the sharp edges are potentially damaging to fatigue life.

has had its sharp edges removed in a process called “conditioning." Conditioned cut wire shot is used in shot blasting and many automotive and military shot peening applications. 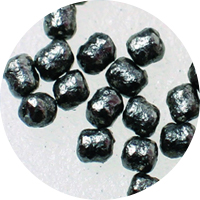 has been double conditioned in order to achieve shot that is more spherical in shape. 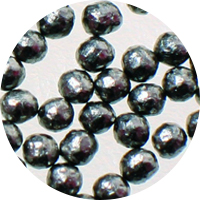 has been cut and conditioned to produce an exceptionally smooth and round media. This media is used in the most demanding blast cleaning and shot peening processes.

Due to its wrought internal structure with no internal defects (cracks, porosity and shrinkage), the durability of Cut Wire Shot is much greater than Cast Steel Shot. Microstructure of Cut Wire Shot is pearlite which is best combination of hardness and durability. Microstructure of Cast Wire Shot is bainite (which deforms quickly) or martensite (which led to fracturing of shots). Minimum service life (durability) of Spajic Cut Wire Shots is 4200 cycles, regardless particle size and hardness. In addition to the Durability of media, the mode of breakdown is very important, especially in shot peening applications. Cast Steel shot deteriorates by forming broken (fractured) particles. Cut Wire Shot media's mode of deterioration is wear. Cut Wire Shot particles tend to wear down into smaller diameter pieces rather than fracture into sharp edge broken particles.

Cut Wire Shot media has the highest consistency from particle to particle in size, shape, hardness and density. Cast wire shot does not have Consistent Performance due to fast size deterioration.

Cut Wire Shots are being made out of same wire and they are identical, no variation of size anywhere. Cast Steel Shots are being produced of mixed size hence product is a mix of various sizes.

Cut Wire Shot media tends to wear down and become smaller in size rather than fracturing into sharp-edged broken particles, which may cause surface damage to the part.

The longer useful life of SPAJIC Cut Wire Shot results in savings of media consumption, dust removal and equipment maintenance. Rounded edges cause less damage to all impacted areas of the blast machine.